Chapters formed prior to the Delaware State Society: 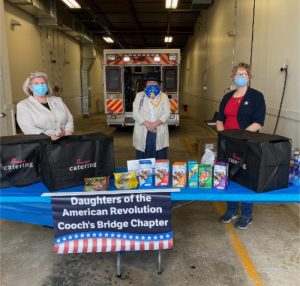 Caesar Rodney Chapter, NSDAR, Wilmington, organized December 7, 1895, by Mrs. Elizabeth Clark Churchman. The chapter was named for Caesar Rodney, signer of the Declaration of Independence and brigadier general of the militia. Visit the chapter WEBSITE.

Chapters formed following the formation of the Delaware State Society:

Mary Vining Chapter, NSDAR, Seaford, was organized on May 18, 1940, by Mrs. Mary Lord Hudson, organizing regent. It was named for the Revolutionary War belle who was betrothed to General ‘Mad’ Anthony Wayne.  WEBSITE.

Colonel David Hall Chapter, NSDAR, Lewes, was organized on September 29, 1951, with Mrs. Franklin Maull as organizing regent. It was named for Colonel Hall, who commanded a regiment of the Delaware continentals and later served as Governor of the State. Visit the chapter WEBSITE.

Major Nathaniel Mitchell Chapter, NSDAR, Georgetown. Born to James and Margaret Dagsworthy Mitchell, in 1753, Nathaniel Mitchell was the first of five native sons of Laurel, Delaware, to rise to the office of Governor of the State. He is the town’s most renowned patriot and her. Visit the chapter WEBSITE.

Battell and Read Chapter, NSDAR, New Castle, was organized on October 15, 2022, with Valarie Leary as the organizing regent.  It was named for both Elizabeth Empson Battell, proprietress of the Golden Fleece Tavern, from 1777 to 1792, located on the Dover Green; and Gertrude Ross Til Read, wife of George Read, Signer of the Declaration of Independence. Mr. and Mrs. Read lived in New Castle and are buried at Immanuel Church on the Green.  Visit the WEBSITE (awaiting approval).

The content contained herein does not necessarily represent the position of the NSDAR. Hyperlinks to other sites are not the responsibility of the NSDAR, the state organizations, or individual DAR chapters.